From the pen of veteran Australian political reporter
​and former ABC foreign correspondent: 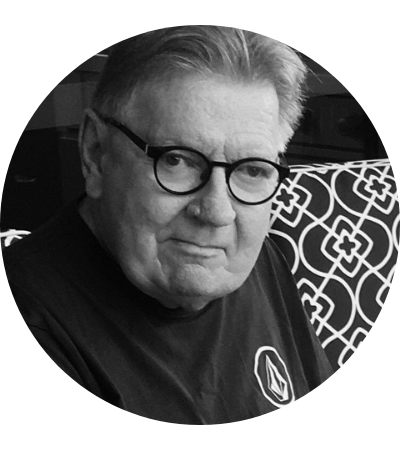 Author and journalist, Russ Morgan honed his writing skills through a career in the hard-edged world of political reporting in Australia and internationally as an ABC foreign correspondent covering Europe, the Middle East and Africa, a world filled with tales of power, passion and treachery.

He draws on this rich experience in his novel, Celestine, now an audio book with the author as narrator.

Being a committed storyteller led Russ to enter journalism and through a stroke of extraordinary good fortune as a young reporter, to ride on a media bus with the White House Press Corp covering US President Lyndon Johnson’s visit to Townsville in October 1966. It was an experience that stayed with him and evolved into a story of secrecy and passion.​

A boy from Innisfail, Queensland

Russ Morgan was born into a large extended family in a small multi-cultural sugar town in far North Queensland.  From his earliest years he absorbed tales told by his working-class parents, grand-parents and great-grand-parents of wars, personal hardship and the drama of weathering cyclones and other natural disasters. Human resilience, courage and kindness soon became the mantras of his life while the endless bounty of nature coloured his imagination as he took to storytelling with life-long passion.

Above his hometown of Innisfail loomed the state’s highest mountain, Mount Bartle Frere, which for this boy on his way to becoming a journalist and writer took on enormous significance. With its peak hidden behind a veil of rain bearing cloud for most of the year, it appeared to be wrapped in profound mystery and even supernatural powers. The young and ever curious Russ named it Mysterium Tremendum.

In school his report cards said, ‘Dreamer – could do better’. But Russ was happiest staring out the window at what he called his dreaming hills to the north of the town. His preference would always be running though the sugar cane with his dog, Patchy, or swimming in creeks cooled by waters tumbling down from the lofty mountains. In time, he became committed to celebrating and preserving the global environmental values like those of the tropical rainforests and the Great Barrier Reef.

From early childhood he developed a deep respect for local indigenous people along with South Sea Islanders who had been brought in by slave traders known as Blackbirders to work in the cane fields. Russ’s awareness of this injustice was aroused by his grandfather, William ‘Bill’ Clifford, with a story from his own childhood when he had seen a rough wooden box, serving as a coffin for a Kanaka, as South Sea Islanders were known, slip from the back of a horse drawn wagon and become stuck in the mud with no one in a hurry to restore dignity. ‘A different story if it had been a white man,’ Bill Clifford had said.

For this lover of words, bookshops are among the great joys of his life. Always committed to the enjoyment and power of story, Russ, an avid reader took enormous delight in sharing this pleasure with his young sons and in turn his grandchildren. The stories of Joseph Conrad and Charles Dickens enriched his world as a teenager. As he moved into senior roles in reporting, Russ drew satisfaction from being able to mentor young reporters, something he considered a privilege. Some remain close friends. ‘It’s all about the story,’ has been his lifelong mantra.

But the curiosity that drove him to journalism and writing along with the endless seeking to explore fresh ideas and understand how the world works, remains with him more vigorously than ever. Coupled with a lively imagination, that irresistible passion for telling a story still holds the same urgency and delight.
​
Contact Russ
B&A Technologies for Russ Morgan. Copyright © 2022.
Powered by